On Autism and Other Things 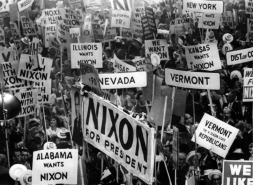 It’s not my Republican Party anymore. This is a sad thing for me to have to admit as I watch the happy   in Tampa, Fla., on my TV screen. For me, and I suspect for many voters, politics is tribal and visceral and deeply ingrained. We don’t really question our politics: It’s part of our identity, like religion and ethnicity and loyalty to the home team.

For me, Republicanism was always about my dad. In the 1950s he was a South Side Irish Catholic who was, unlike everybody around us, a Republican and a Cubs fan. Loving and admiring him, I was also part of a team — it was my dad and I against the world, conservative underdogs in a contest stacked against us.

This feeling was cemented for me when we went to the Republican National Convention of 1960 in the old International Amphitheatre.

Having no real political connections, we found we couldn’t actually get onto the convention floor itself. Our tickets, a gift from a relative, only permitted access to the lobby.

We were crushed. The whole point was to see the show, but there was no way. I followed my dad around in the crowd for a while until we were standing next to a vast curtain separating some huge stands from the convention floor.

Then something crazy happened: He pulled the curtain aside, picked me up and told me to climb the wooden supports undergirding the stands.

Frightened, I hesitated. “Go,” he said. “Just go!” I looked up in the darkness to see the bottoms of benches, legs and slivers of bright lights far overhead.

Squeezing in beside a man smoking a cigar, I heard him say, “Hey, kid. You’re not supposed to be here.” I told him something about doing what my dad told me to do. He smiled and said, “That’s OK. Keep your eye on that guy over there. He’s the sergeant-at-arms. If he asks, I’ll tell him you’re my son.”

It turned out I had the best seat in the house. I sat with the press, several rows behind the speaker’s platform. It was a riot of sensory overload: the smoke, the bright colors, the roaring crowd, the deafening music. Across the hall I could see hanging from a rafter stupendous, huge prints of Dwight Eisenhower and a beardless Abraham Lincoln. It was the 100th anniversary of Abraham Lincoln’s presidential nomination in Chicago. I was there in the heart of it all. I was with my people. And I became the eyes and ears of my father, who couldn’t see any of it.

That world is gone now. Dad died young and suddenly in 1968. And the Republican Party has morphed into something dark and alien to me. My loyalty to it died slowly from a hundred blows. To take just one that stands out: the moment in the GOP debate among the eight presidential contenders last year when the Republican audience cheered — and cheered wildly — Gov. Rick Perry’s proud record of overseeing 234 executions in Texas. Or another: Mitt Romney’s apparent eagerness, despite our grinding, endless Mideast wars, to start yet another one with Iran.

But as I watch the talking heads on my television screen this week, I still can’t suppress a little nostalgia — not for the party, really, but for that moment when my dad forgot all about himself and picked me up so that I could experience something vivid and amazing. That’s where the real identity lives — not the party affiliation but the lesson from my father:

If you can give your son something fine he’ll remember all his life, do it. Forget the self. Don’t hesitate. Just go.